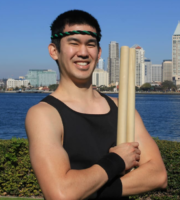 Instructor:
Devin is a percussionist at heart. After many years of taking western percussion, Devin started playing taiko in 2009 with UCI Jodaiko. Four years of collegiate taiko later and longing for more taiko in his life, Devin sought taiko in his hometown of San Diego, in which he found Naruwan Taiko performing at San Diego Buddhist Temple’s obon. Since joining in 2013, Devin has had a blast performing and hanging out with his fellow Naruwanians, as well as helping spread taiko into the San Diego community.