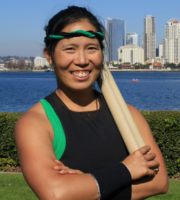 Diana discovered taiko in 2006 with UC Berkeley’s Raijin Taiko. After she graduated in 2007, Diana wanted to bring the amazing experience of taiko drumming to her local community, and thus formed Naruwan Taiko. Her musical experience includes the piano and the violin and she was also a part of her high school orchestra. A law school graduate, Diana is thankful that taiko provided the ultimate release from the rigors of academic life. When not on the taiko, Diana can be found playing with her doggy Mochi at the beach or scarfing down some carne asada fries. Photo Credit: Kim Nakashima.