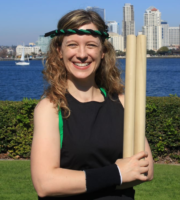 Kelly joined Naruwan Taiko in 2008 and has been having great fun practicing and performing with the group ever since. Originally from New York, Naruwan was her first exposure to taiko shortly after moving to San Diego. She joined after watching one of Naruwan’s early performances and was inspired by the group’s joyful and energetic style. As a taiko player, she especially enjoys naname, odaiko, and the atarigane. Kelly met her husband through the group, and now has a son who loves taiko too!